Going back to 1974, was a cold April morning around 9-10am, Arnold had just just flown in at 6am that morning from Los Angeles.  The Opera House was only one year old and a great spot to take some photos. The best spot was over the Harbour Bridge at a little suburban place next to the bridge called Kirribilli. 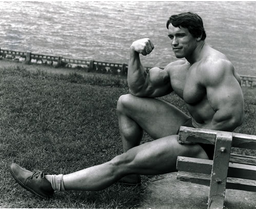 There was a park just under the bridge which went all the way down beside the bridge and underneath, we met a journalist photographer at the spot.   I thought to myself “Let this guy take his pictures then I can concentrate on what I want to take.” I put together some basic shots, shooting a little more into the frame so I had room to crop for good photos later. I only took black-and-white because the weather was overcast and dull, even so I should have taken colour as you never get the chance again. 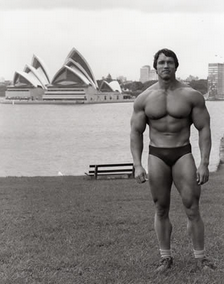 To get the Opera House up close I had to use a telephoto lens. 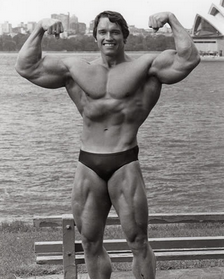 I took several shots (not enough) in different positions; it took about half an hour to get what I wanted but Arnold was getting impatient and wanted to put his clothes back on, as it was very cold and wanted to get settled in a motel and eat. 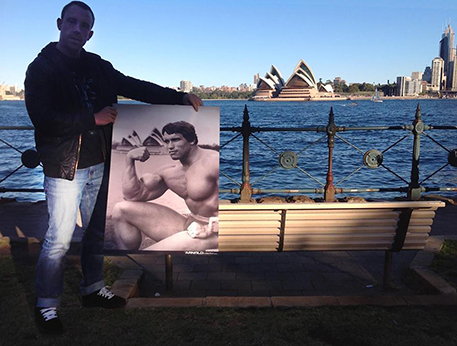 After the last poster series was a sell-out success we decided to take a trip back over the bridge to see the iconic site and what it is today. 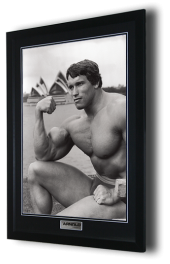 The place has changed a bit since 1974, but is still very much the same, the seat that Arnold sat on has obviously been replaced and a fence has been placed around the skirts of the harbour. The whole park has been dug out with a road travelling around the skirts of the park and a car park has been put in place. From what I can remember it was a big park on a slight slope with a few seats and that was it.

Time has gone very quick and the times have changed, this time I took my iPad for a couple of photos instead of my  “MAMIYA RB67” Film Camera. You can still purchase the photo which is now a piece of memorabilia from our store.  Spoken by Robert Nailon and published by Mark Goudie. Purchase Framed Print Memorabilia
Share on facebook
Share on twitter
Share on linkedin
Share on whatsapp

Link to The Arnold Collection